PHOENIX: THE RISING JUST TURNED ONE!! 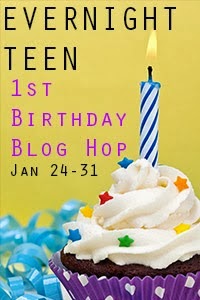 ET will be raffling off a $100 iTunes gift certificate, taking 25% off all Evernight Teen titles on the ET site from 1/24-1/31, the other authors and reviewers may have their own special prizes, and I'll be giving away TWO $10 Amazon gift cards!

All you have to do to win a chance at one of my $10 Amazon gift cards is A-join my site (just to the right) and B-answer a simple question about the excerpt below. Leave your answer in the comment section along with your email address and I'll contact the winners after February 1!


“Where in the hell have you been, young man?”
Eli spun around, nearly dropping the towel he clutched around his waist. Lucy giggled and waved from her spot near the window. “Surprise!”
“Ah, jeez, Lucy, you about scared the crap out of me! What are you doing in here? Do you know what time it is?” Eli tightened his grip on the towel and marched over to his dresser.
“I was worried. I thought for sure something happened to you.” She strolled over to his bed and sat, crossing one long, smooth leg over the other. “What are you doing out so late, anyways? We do have school in the morning, you know.” One of the straps of her camisole fell off her shoulder, revealing tanned, soft skin and a hint of cleavage.  Lucy didn’t make any attempt to cover up. She knew her body was bangin’, and she wanted to make sure Eli noticed as well. Unfortunately, his eyes landed only momentarily on her legs, barely hesitating on them before he turned and headed towards the closet.
“I’m well aware that we have school tomorrow, and where I was is none of your business.” To Lucy’s delight, Eli’s use of the flimsy closet door as a dressing screen while he changed into a pair of athletic shorts was about as successful as her own attempt to seduce him. Lucy bit her lower lip as brief glimpses of muscular, naked ass made her blood race in her veins once again. It took everything in her to keep from pouncing on him at that moment. Instead, she rolled to her stomach and batted her eyelashes at him as he approached the bed.
“I bet you went to see a gir-rl,” Lucy sang, but the taunting elicited nothing from Eli but a dark, exasperated stare. Lucy slid off the bed and began circling him with the giddy anticipation of a vulture about to dive-bomb fresh road kill. “Hmmm.” She tapped her chin as she pushed further. “Let me see if I can guess who it was. You went to Homecoming with that girl. What was her name?” She raised an eyebrow and smiled in self-satisfaction at her game-playing skills. “Julie, wasn’t it?” The muscle in his jaw twitched. Bingo! She stopped her circle of attack just inches from his nose. God, he smelled good! “You are a naughty boy, Eli Sullivan. I thought you said you didn’t know where she was?” Lucy tapped him on his nose, yelped, and pulled her finger back as a small burst of electricity passed between her finger and the end of his nose...

And now... the question: What was the name of the girl Eli took to Homecoming?  Post your answer in the comment section below, along with your email, and don't forget to join this site so you are sure to be entered into the drawing! Good luck!